Introduction – A Word Of Warning

First off – I do not recommend you write your own hand-rolled data access solution for an OO .NET application. Ayende has a great post that should convince you to use something like NHibernate, LLBLGen, Entity Framework, or Linq2Sql. I strongly agree with him. I’ve worked on several projects which had a hand rolled, stored procedure based DAL. All of the DALs that were of a medium-to-large-size eventually turned into a huge mess, or something with tons of friction and poor performance. That being said, I am not allowed to use an ORM at my current employer, and I know that many others are not as well. That being the case, I think this post may be of use for other people in the same situation.

Secondly – I specifically used the word “practical” to describe this strategy. Although there are ways to do this sort of thing with code gen and/or reflection, I am going to assume that most places that don’t use ORMs will find those techniques to be too complex.

Thirdly – This article is focused on the lazy loading aspect of the sample code. The implementation / organization of the data access layer is not to be taken as best practices. It is organized in a way to be easily understood, and so it does not get in the way of the topic at hand. I am also ignoring many other features of a robust data access layer (change tracking, transactions, etc…) as I think they do not need to be understood in order to put this concept in action. However, there is nothing about this implementation that would exclude it from being used with other ORM concepts.

As far as this article is concerned, here are the operational definitions of the core terms:

Entity: An object that is persisted to the database that has business related behaviors.

Data Access Object (DAO): A DAO is a data access layer (DAL) object that has the responsibility of calling the database and mapping the results to entities. The Repository Pattern is a relative of the DAO pattern.

Persistence Awareness (PA): An entity that is persistence aware is one that is responsible for its own persistence.

A PA entity is either directly or indirectly aware of its data store and is responsible for coordinating the persistence of its children. When the persistence methods are called, it news up the appropriate DAO and gets the results back.

Persistence Ignorance (PI): An entity that is persistence ignorant relies on other classes to handle the responsibility of persisting it.

The coordination of persisting and retrieving child entities is also handled by the external class.

Lazy Loading: Lazy loading is a term that refers to delaying the retrieval of a child collection until it is accessed. This is done to save trips to the database and to reduce application memory consumption.

Why should PI be preferred to PA?

There are two reasons which are a bit related. First off, persistence code tends to be tricky and long winded. Often times there is more persistence code in a PA class than business logic. Secondly, you always want to give your class as few responsibilities / reasons to change as possible. The code in your entities should focus on business behavior rather than infrastructure concerns such as persistence.

If PI is preferred, why do most hand rolled data access layers use PA?

In my experience, people usually prefer PA because it makes lazy loading extremely easy. The typical pattern is to hit the database when a property is accessed and its backing field is null. This is a very easy pattern to understand, but unfortunately it sticks our entities with all of the overhead and complexity of persistence concerns.

Now that we have all the background out of the way, let’s take a look at an implementation I’ve tried recently that seems to work well and is very easy to understand. It comes down to two classes which are coordinated by the application’s DAO classes. These two classes are:

LazyLoadingList<T> – This is a wrapper around List<T> which triggers a load whenever one of its methods is called.

LoadDelegate<T> – This is the delegate that is executed when a LazyLoadingList<T>’s load method is triggered.

Here is the code for the LazyLoadingList<T>:

Here is the code for the LoadDelegate

I’ve put a demo up on Github that ties this altogether. The project is organized as follows: 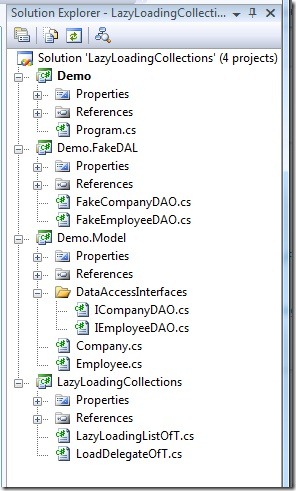 The Employee load delegate gets wired up in the Company DAO like so:

There are many possible improvements to this strategy depending on how far one is willing to go. It would be very easy to auto wire up everything with one generic delegate if DAO semantics were uniform across DAOs etc…

This technique has been reworked for .NET 4.0 here.